What is an IVC Filter? 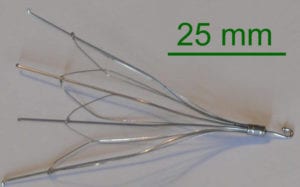 IVC filters are intended to prevent life-threatening pulmonary embolisms, also called: blood clots in the lungs and most types are supposed to be removed from the body when they are no longer critically needed. Unfortunately, many IVC filters were not removed as they should have been causing many people injury and harm.

What are the Dangers of IVC Filters?

In 2010, the United States Food and Drug Administration (FDA) reinforced the safety concerns about IVC filters when it issued a Device Safety Communication. Specifically, the FDA reviewed more than 900 adverse events related to the IVC filters from 2005 to 2010. Those adverse events included:

As a result, the FDA recommended that the IVC filter should be removed from a patient as soon as protection from a pulmonary embolism is no longer needed.

Use of IVC filters decreased significantly after the FDA issued the Device Safety Communication.  However, IVC filters are still in frequent use in the United States. In fact, IVC filter implantation rates are 25 times higher in the U.S. than in Europe.

Thousands of legal claims have already been filed against the manufacturers of certain IVC filters for poor design, failing to warn of risks, and other acts of negligence or worse. Many valid claims that have not yet been filed. In fact, many IVC filter recipients are still unaware that they may be at risk for injury and have valid legal claims.

As of October 2018, more than 9,000 lawsuits were filed in federal court against IVC filter manufacturers by individuals who have been injured because of the devices.

Two of the top manufacturers of the IVC filters named in the lawsuits are Cook Medical and Bard Peripheral Vascular, Inc. (a subsidiary of C.R. Bard). Studies have shown at least five IVC filters are prone to fail and injure the patient. These five filters are Cooks Celect, Cooks Gunther Tulip, Bards G2 Express, Bards G2, and Bards Recovery filters.

Compensation in an IVC Filter Lawsuit

If you have received an IVC filter, you may be entitled to the following compensation:

If you or a loved one has received an IVC filter that has not yet been removed or that has been removed after causing injury, we invite you to call West Law Firm for a FREE Consultation.  To learn more about your rights and options, call us today toll-free at 1-877-943-WEST (9378).  There’s also no cost to you unless and until we recover compensation for you.