Statutes of Limitations: How Long You Have To File a Lawsuit in West Virginia

Time Limits on West Virginia Personal Injury and Other Claims 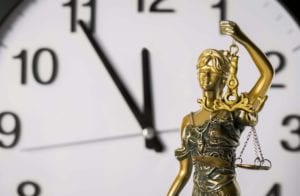 A statute of limitations is a law that limits the time someone has to pursue a legal remedy for a harm or loss they have suffered because of another’s negligent or wrongful conduct.  Once that statutory period expires, the injured party FOREVER loses their legal right to recover compensation.

What Are Some of West Virginia’s Statutes of Limitation?

The statute of limitations applies to almost all types of cases from automobile accidents to wrongful death claims.  Below is a breakdown of the statute of limitations in West Virginia for most types of civil actions. The clock generally starts ticking from the date of injury or loss. Warning: Laws change frequently and the facts of every case are different. So, it’s important to ask an attorney experienced in the field of law concerning your case to determine the exact time limit you have to file a claim.

Specifically, with regard to the 2-year limitations period for personal injury cases, the period begins to run when the cause of action arises or, under the Discovery Rule, when the injured party knows, or through the exercise of reasonable diligence should know that he or she is injured because of someone else’s negligence. The cause of action usually arises at the time of injury.

Wrongful death is similar to personal injury in that the statute of limitations is 2 years, and the limitations period begins when the decedent’s representative knows, or by the exercise of reasonable diligence should know, that:

The rules with regard to medical malpractice and nursing home injuries require a little more detail.  As noted above, the general statute of limitations for medical malpractice in West Virginia is 2 years from the date of the injury, or 2 years from the date the injury is discovered or should have been discovered.  West Virginia law, however, also has what is called a “statute of repose,” which says that a claim cannot be made more than 10 years from the time of the malpractice.  Accordingly, no matter how serious the medical error, the lawsuit is time-barred after 10 years.

As with a number of states, West Virginia also has a damages cap on the amount a plaintiff can receive for non-economic damages, which are damages for such things as pain and suffering, emotional distress, and loss of enjoyment of life.  The medical malpractice cap on damages in West Virginia for non-economic losses is $250,000 but jumps to $500,000 if the medical malpractice resulted in catastrophic damages like wrongful death or permanent, severe injury. West Virginia does not have a cap on economic damages, such as medical expenses, lost income, and lost earning capacity.

The statute of limitations clock may be paused, or “tolled,” for medical malpractice cases when the defendant health care provider has committed fraud or collusion by concealing or misrepresenting facts about the injury.

Statute of Limitations Regarding Minors

With regard to medical malpractice cases, if a child receives a medical injury when he or she is younger than 8 years old, the claim must be made prior to the child’s 10th birthday.  For a child older than 8, the claim must be filed within 2 years of the injury.

When Does the West Virginia Statute of Limitations Clock Begin to Run?

In West Virginia, a statute of limitations is said to start running at the time a claim “accrues.”  That is typically the time when someone is injured or has suffered some type of damage.

Yet, there are times when it is not reasonably possible for a person to know that an injury has occurred until long after the incident that caused the injury.  For example, companies used asbestos in their products and allowed their employees to work with asbestos, long before it became clear that exposure to asbestos causes mesothelioma.  Further, the injury – mesothelioma – does not materialize until long after the exposure.

In those situations, West Virginia (as elsewhere) employs what is called the “Discovery Rule.”  That rule provides that the clock does not start until a person is aware – or should have been aware – of an injury.

Why is There a Statute of Limitations in West Virginia?

It forces the plaintiff, the party bringing the claim, to be diligent in bringing the legal action within a reasonable amount of time.

It keeps the defendant, the party accused of wrongdoing, from having the cloud of a lawsuit hanging over his or her head indefinitely.  At a specified time, a defendant can be secure in the knowledge that they are no longer exposed to potential liability.

For more information about the West Virginia Statutes of Limitations and how they may apply to your personal injury case, we invite you to call one of our experienced personal injury lawyers for a Free Consultation. Our toll-free number is 1-877-943-9378 (WEST). West Law Firm also never charges a fee unless and until we recover compensation for you.