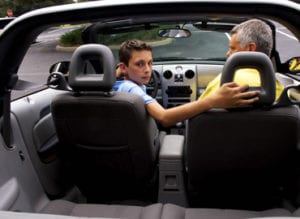 insurance limits in an effort to better protect its citizens. Below is a breakdown of the requirements from the West Virginia Offices of the Insurance Commissioner. And most importantly, below is a discussion of unsinsurance and underinsurance coverage: two often misunderstood insurance coverages that are critically for protecting ourselves from uninsured and underinsured drivers.

What are the Minimum Liability Insurance Requirements in West Virginia?

Liability insurance compensates a person other than the policy holder for personal injury or property damage typically for negligent acts and/or omissions of the policy holder or someone driving his or her vehicle. There may be other circumstances that triggers liability insurance coverage. If in doubt when injured, it’s best to speak with an experienced auto accident attorney to learn about your rights.

What are the Minimum Uninsurance Motorist Requirements in West Virginia?

Uninsurance motorist insurance covers losses related to injuries, death or property damage caused by an uninsured driver. An uninsured driver is someone without an auto insurance policy, and unfortunately, The Insurance Research Council estimated in 2011 that about one in seven that a drivers in the U.S. are uninsured.

Underinsurance and Mandatory Optional Offerings of Coverage in West Virginia

Underinsured motorist insurance is designed to cover losses such as injuries, medical bills, and lost wages that was caused by another person who doesn’t have enough liability insurance to cover your losses. While underinsurance is not required in West Virginia, insurance agents are required to offer it to you as stated above.

Under West Virginia law, increased underinsured motorist coverage may be purchased up to the limits of liability coverage carried on the policy.

How Much West Virginia Uninsured and Underinsured Motorist Insurance do You Need?

As experienced personal injury lawyers, one of the saddest situations we frequently see is where someone is seriously injured or killed by another driver who doesn’t have insurance or who doesn’t have enough insurance to cover the losses associated with the crash.

What’s the Most Important Thing You Can do to Protect You and Your Family from Uninsured and Underinsured Drivers?

The most important thing you can do outside of defensive driving to protect you and your family from uninsured and underinsured drivers is to purchase substantial uninsurance and undersinsurance Coverage. These coverages typically don’t cost a lot more and are essential. Here’s why:

One real life example with identifying facts changed to preserve anonymity is as follows: a mother of three was on her way home when a negligent driver crashed into her head on. The mother was critically injured and life flighted to the nearest hospital where she died three days later.

The negligent driver only had the minimum West Virginia liability insurance coverage of $25,000, and the mother had no undersinsurance coverage. Therefore, there was not enough insurance money to even pay for the mother’s medical bills and funeral costs, let alone money need to help care for her children.

If you’ve been injured in an accident or due to another’s negligence, please feel free to call the personal injury lawyers at West Law Firm for a free consultation. There’s never a fee unless and until we recover money for your losses.