Compensation for Injuries When Partly to Blame for a WV Car Accident? 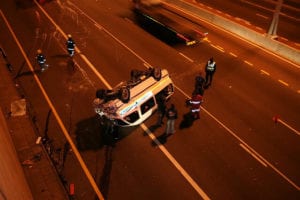 If you’ve been injured in a car accident that is mostly another driver’s fault, you can still recover compensation for your injuries unless you are 50% at fault or greater. West Virginia has adopted the modified comparative negligence doctrine. Bradley v. Appalachian Power Co., 163 W. Va. 332, 256 S.E.2d 879 (1979). Under this doctrine, a claimant’s action is barred if his or her negligence equals or exceeds the combined negligence of all the other parties involved in the accident. If the claimant is less than 50% at fault, his or her recovery is reduced in proportion to his or her degree of negligence.

So say for example, you are driving down the road five miles over the speed limit and suddenly another car swerves into your lane and hits you.  At trial, the jury then finds that you were 10% at fault and the other driver was 90% percent at fault.  The jury also finds that your damages are $100,000. Under the modified comparative negligence approach, you would recover $90,000 (90% of your damages) because that is proportionate to the other drivers fault.

Is the modified comparative negligence doctrine the best approach?

Although it’s easy to see how West Virginia’s modified comparative negligence approach can be problematic when it’s a close call as to who is at fault, other approaches are even more problematic and can result in harsh unfairness. For example, the draconian contributory negligence rule states that if you are at fault to any degree then you cannot recover in court.

The pure comparative negligence approach is problematic because it allows an injured person to recover if he or she is less than 100% at fault.  This could make most parties involved in an accident a plaintiff.  For example, in the above scenario, even though you were only 10% at fault, if West Virginia followed the pure comparative negligence approach, the driver who swerved into your lane could sue you and recover 10% of his damages.

There are a number of other issues that could affect your claim and how a court will apply the modified comparative negligence doctrine if you’re partly at fault.  For example, proximate cause is still a requirement to recover damages and comparative negligence is not an available defense in intentional tort cases.  Thus, it’s advisable to consult with a skilled personal injury attorney to evaluate your case.

Your comments and opinions about the different approaches mentioned above are appreciated.