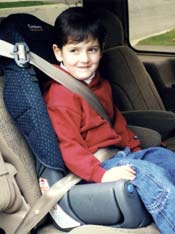 Studies have found that teens whose parents set rules and monitor their driving, behavior and seat belt use are twice as likely to wear a seat belt as a driver or passenger as teens who say their parents are uninvolved. These teens also are nearly twice as likely to believe that buckling up affects safety. You can make a difference by always wearing a seat belt and insisting that everyone else does too.

Teens decide what’s “normal” or “expected” by observing the behaviors around them, including their parents, even if they pretend they don’t care. They’ll be more likely to buckle up if you have established seat belt use as a routine.

Establish seat belt use as a rule for using the car. Be sure to remind your teen of this rule whenever he takes the keys and heads out the door and follow through on suspending her driving privileges when she breaks this rule.

Never turn the key until everyone is buckled up. Remember, your child learns how to be safe by watching you, and this simple routine will make it more likely your teenager buckles up too.

Explain it’s about safety, not control. Insisting on seat belts is a rule in place for your teen’s safety not for control. It’s a rule you follow yourself and one you demand because of how much you care.

Honest communication – share with them the facts. The majority of teens who were killed in car crashes weren’t wearing seat belts. A lot of teens also think seat belts are only necessary on highways or on long trips. Let them know most crashes happen in the neighborhood and that people can and do get hurt traveling close to home.

Explain that most teenage passengers that died in crashes were not wearing seat belts, too. In a crash, an unrestrained person can also hurt others in the car.

And if you have teenage drivers, make sure they keep their eyes on the road, not their cells phone.

We hope everyone wears a seat belt and makes it to their destination safely. However, if you or a loved one has been injured by a negligent driver, we invite you to call West Law Firm for a free consultation. Our toll free number is 1-877-943-9378. And we never recover a fee unless and until we recover compensation for you.