GM gets some good news after its CEO was grilled on Capitol Hill for botched recall of 2.6 million vehicles linked to at least thirteen deaths

GM botched a recall of 2.6 million vehicles linked to at least 13 deaths in 32 crashes.  The 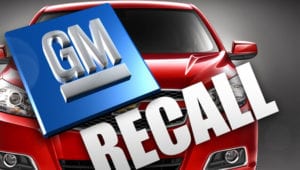 recall affects smaller cars that GM no longer makes, including the Chevrolet Cobalt and HHR, the Saturn Ion and Sky, and the Pontiac G5 and Solstice.  Unfortunately, many of these vehicles haven’t been repaired and are still on the road, according to one car accident lawyer.

On the other hand, the automaker got some good news on Tuesday when two GM SUVs earned top ratings in a new crash test.  The Chevrolet Equinox and the GMC Terrain are the only two vehicles to earn the top rating from the Insurance Institute for Highway Safety out of nine popular midsize SUVs tested.

The new test replicates what happens when the front corner of a vehicle collides with another car, or with an object like a tree, at 40 miles per hour. It is more challenging than the institute’s traditional frontal crash test and the head-on crash test performed by the government, according to the Insurance Institute for Highway Safety.

The institute developed this test in 2012 after finding that one quarter of serious frontal crashes are caused by “small overlap” impacts. This is the first time it tested midsize SUVs in this capacity.

The Equinox and Terrain have also been named Top Safety Picks Plus by the institute. That means the vehicles received good ratings on five other tests and are available with a front crash prevention system that alerts drivers of an impending collision.

The Toyota Highlander received the institute’s second-highest rating in the crash test and was also named a Top Safety Picks Plus.

The Kia Sorento, Mazda CX-9, and Honda Pilot earned the worst rating in the small overlap crash test.  On the other hand, they did well on traditional frontal and side impact tests. A statement from Honda said that the Institute named the 2013 Pilot, which has the same body structure as the 2014 model, a top safety pick last year. A Mazda spokeswoman said the CX-9 was designed before the Institute began its new crash test. Kia did not respond a request for comment.

Although some of GM’s older vehicles continue to pose a safety threat, “When it comes to midsize SUVs, General Motors is showing the way forward,” wrote David Zuby, the institute’s chief research officer, in the report.

If you’ve been injured in a West Virginia motor vehicle accident or due to a defective car, SUV, or truck, please feel free to call a personal injury lawyer at West Law Firm for a free consultation.  We are located in Charleston, West Virginia and serve people throughout the state and the US who have been injured anywhere in West Virginia.  Our toll free number is 1-877-943-9378.