Dozens of lawsuits have been filed against Dr. John H. Pellegrini since 2010 involving claims 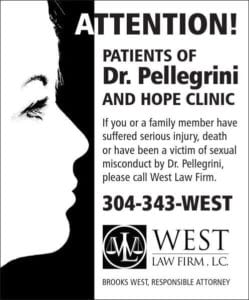 that Pellegrini sexually abused and harassed patients.   Pellegrini also apparently continued to practice medicine at the Hope Pain Clinic in Beckley, West Virginia for two years after twenty women filed lawsuits against him in April of 2010 claiming that he sexually abused and harassed them.  Fortunately, in November of 2012, The West Virginia Board of Osteopathic Medicine suspended Pellegrini’s license to practice medicine, according to this Order.

At West Law Firm, our West Virginia medical malpractice attorneys are outraged and saddened by these claims.  Prescription pain killers were involved in 14,800 overdose deaths in 2008, according to the US Center for Disease Control.  The thought that Pellegrini may have been prescribing these dangerous drugs at the same time he was accused of sexually abusing and harassing patients makes us shudder.

That is why we are offering free and confidential consultations to anyone who believes that they or a loved one was injured, sexually harassed or abused, by Dr. Pellegrini or the Hope Pain Clinic.  We are currently pursuing claims against Pellegrini, Hope Pain Clinic and others.  Our attorneys have handled other claims against physicians related to overdose deaths and are familiar with the medical standards related to the proper procedures for prescribing opioid and non opioid medication as well as monitoring the proper use of pain medication.

In 2001, Dr. Pellegrini was the subject of a medical malpractice lawsuit filed in federal court.  The lawsuit stemmed from allegations that Dr. Pellegrini negligently performed a hysterectomy on the plaintiff.

In July of  2010, TWENTY women filed lawsuits in Wayne County Circuit Court alleging that Dr. Pellegrini sexually abused and harassed them while he worked as a physician at the Lakin Correction Center, according to the West Virginia Record.  In their lawsuit, the women state they  suffered anxiety; humiliation; annoyance and inconvenience; invasion of privacy; emotional distress; pain and suffering; mental anguish; loss of their ability to enjoy life; future medical expenses; and other damages as a result of Dr. Pellegrini’s sexual abuse and harassment, according to the West Virginia Record.

Then in 2011, Crystal Bradley filed a lawsuit against Dr. Pellegrini arising from claims that in 2009, Pellegrini willfully, wantonly, grossly negligently embraced, touched and made sexual advances toward her, according to the West Virginia Record.  As a result of Pellegrini’s actions, Bradley sustained severe emotional and mental distress; humiliation; anxiety; embarrassment; depression; aggravation; annoyance and inconvenience; fear; sleeplessness; difficulty in relationships with her significant others; and distrust of others, according to the suit.

As mentioned above, in 2012, The West Virginia Board of Osteopathic Medicine suspended Pellegrini’s medical license.  In its Order, the Board found probable cause to believe that Pellegrini engaged in unprofessional and unethical conduct.  The Board also issued a Statement of Charges that alleged Pellegrini committed repeated acts of an unethical exercise of influence within a doctor-patient relationship for the purpose of engaging a patient in sexual activity.

The Board also found that Pellegrini was likely to continue his practices of unethical and inappropriate behavior unless it took immediate action.  The Board then suspended Pellegrini’s medical license based on a finding that Pellegrini’s continued practice of medicine and surgery would constitute an immediate danger to the public.

In 2013, at least one lawsuit has been filed against Pellegrini, Hope Clinic and ERX involving allegations that Pellegrini sexually abused, sexual harassed his patients and subjected them to other inappropriate conduct, according to the West Virginia Record.

Given the West Virginia Board of Osteopathic Medicine’s finding of probable cause that Pellegrini committed repeated acts of unethical influence over patients for the purpose of engaging them in sexual activity, it’s unfortunately possible that some of Pellegrini’s former patients at the Hope Pain Clinic may have suffered serious injury or death as a result of being prescribed high powered pain killers.

At West Law Firm, we have the skill, experience and compassion to help those who have been harmed, injured, sexually harassed or abused by doctors and/or other medical providers in West Virginia.  We understand it may be very difficult to come forward to tell your story. That is why we offer free and confidential consultations.  If you call us, there is no obligation to file a claim. Our toll free number is 1-877-943-WEST (9378).

Our medical malpractice lawyers are located in Charleston, West Virginia, but we serve clients throughout the state and will come to you if that’s more convenient.