For more than 60 train passengers, it was meant to be scenic trip to see the colorful foliage in the remote mountains of West Virginia. For a log truck driver it was a familiar route. 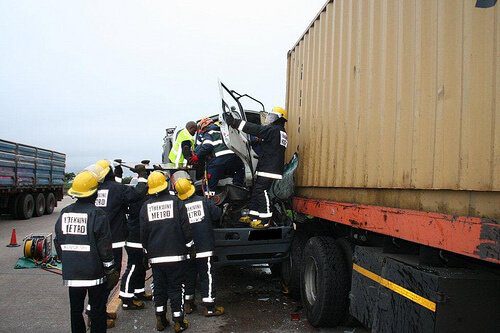 But something went wrong with fatal consequences.

Investigators are now trying to work out why the logging truck crashed into the train at the West Virginia crossing on Friday, killing the truck driver and injuring 23 people on the train.

“At least six of the injured were hospitalized in serious condition after the accident, which came at the height of fall foliage season in the state’s rugged Appalachian region about 160 miles east of Charleston,” reported the Huffington Post.

Randolph County Sheriff Mark Brady told the media the impact left two of the train’s passenger cars on their sides at the crossing while the logging truck was crushed by the impact with the truck driver, who had not been named at the time of the reports, pronounced dead at the scene.

The accident was reported at 1:30 p.m. on October 11, 2013 and involved a train owned by the Durbin & Greenbrier Railroad.

The Charleston Daily Mail reported on how 23 people were treated for injuries at local hospitals and another 42 were examined but found to be uninjured.

My experience as a West Virginia personal injury lawyer, I have a number of serious accidents in recent years involving trucks and train on crossings.

There were indications the railroad crossing was functioning correctly at the time of this crash.

“The railroad crossing signals were flashing at the scene. As all emergency personnel arrived, we observed the signals flashing at the time,” Brady told the media in a taped news conference held with hospital officials who emailed the recording to The Associated Press.

“At this juncture of the investigation, it appears that the log truck had run through the crossing signals and struck the passenger cars of the train,” Brady added in the statement.

Although the truck driver knew the area well, there was no indication he stopped for the train, investigators said.

The TV channel WCHS8 reported the truck driver worked for H&H Fisher out of Pocahontas County where he lived. He was said to be familiar with U.S. Route 250 at Cheat Mountain, the road the crash occurred on.

The accident is the latest in a series of high profile crashes on railroad crossings.

In 2011 a truck slammed into an Amtrak train on a crossing in Nevada, leaving six people dead and many injured.

At least 15 lawsuits were filed in the wake of the accident. Some alleged the railroad crossing gates came down too late or not at all. Others were brought against the trucking company and involved allegations that the brakes were defective on the truck.

At least two wrongful death lawsuits have been filed against Union Pacific following an accident on a railroad crossing in Midland, Texas in 2012 when a train hit a parade float with military veterans onboard, killing four of them.

The suit includes allegations that Union Pacific was negligent in maintaining the crossing.

A railroad may be liable for an accident at its crossing in cases of:

A truck driver or a trucking company can be liable for injuries or deaths caused at crossings if:

If you have been hurt or lost a family member in an accident, speaking with an injury lawyer as soon as possible can help you protect your rights and understand your options. If you would like a free consultation with a West Virginia accident attorney, please call us toll free at 1-877-943-9378.  We are located in Charleston, West Virginia, and serve clients throughout the state.

Our thoughts and prayers go out to the truck driver and passengers injured on the train.
Photo credit